WHAT IS MY CASE WORTH?

Every case is unique and there is no one-size-fits-all approach to seeking compensation for a personal injury or wrongful death claim.

One thing is certain—insurance companies will likely try to settle for as little as possible just to maximize their profits. This is not helpful when you are trying to figure out how to move forward while injured, hospitalized, unemployed, or grieving.

We start by gathering all the evidence, then conducting interviews to establish the value of your case. We will try to reach an acceptable settlement out of court. Should the insurance companies refuse to negotiate fairly we may take the case to court and try it in front of a judge and jury.

At Peton Law, we pride ourselves on aggressively representing our clients in court while never losing our human touch. We'll listen and advise you without pressure. We're here to help you make informed and empowered decisions at every step along the way.

GET THE RESOLUTION YOU DESERVE!

WHAT SHOULD I DO AFTER A CAR ACCIDENT?

PLAINTIFF
A person of group of people who formally make a legal complaint against someone else (the defendant) in a court of law.

DEFENDANT
A person or group of people who have been accused of having done something illegal.

CLAIM
A set of facts creating a legal right enforceable in court. A claim asserts that someone has broken the law and a legal case is being presented to seek damages, restitution, or punishment.

ACTION
The term action refers to a case or lawsuits; a legal and formal demand for enforcement of one's rights against another party asserted in a court of justice. The term action is used more often in civil lawsuits than for criminal cases.

SUIT / LAWSUIT
A generic term for any filing or petition asking for legal redress by judicial action.

FILING
Filing suit means to present a formal document, knows as a Petition or Complaint within a court of law, to initiate a lawsuit.

STATUTE OF LIMITATIONS
A statute prescribing a period of limitation for the bringing of certain kinds of legal action. For example, in the state of Oregon, most civil actions must be filed within two years—this includes personal injury, fraud, and medical malpractice. Some felonies have longer statutes of limitation.

STATUTE OF ULTIMATE REPOSE
Similar to a statute of limitations, a statute of ultimate repose sets a deadline based on the mere passage of time or the occurrence of a certain event that doesn't itself cause harm or give rise to a potential lawsuit.

DISCOVERY
The process and efforts of a party and their attorney to obtain information before trial. This information may include evidential documents, depositions of parties and potential witnesses, written interrogatories (questions and answers written under oath), written requests for admissions of fact, examination of the scene and the petitions and motions employed to enforce discovery rights.

UNINSURED MOTORIST (UM)
An uninsured motorist is a driver who carries no insurance coverage.

UNDERINSURED MOTORIST (UIM)
An underinsured motorist is one who only carries the minimum liability insurance allowable by state law.

N0-FAULT COVERAGE
No-fault insurance is a type of insurance coverage that helps pay for you and your passengers' medical bills if you're in a car accident, regardless of what caused the accident. This term is sometimes used synonymously with Personal Injury Protection (PIP) insurance.

20/80 CLAIM
a 20/80 insurance settlement assigns 80% of the blame to one driver and 20% to another. It is typically used to settle a situation where one driver is mostly to blame, even though the other driver may have contributed to the accident, slightly.

LIABILITY
Liability is the state of being responsible for an action or outcome; it means there is legal responsibility.

MVA / MVC
Motor Vehicle Accident v Motor Vehicle Crash. Although these terms are very similar, a crash signifies negligence—such as speeding, intoxication, or distracted driving, whereas an accident is often simply that.

TOTALED VEHICLE
A car is considered to be totaled when the cost to repair the car exceeds the value of the car.

PROPERTY DAMAGE CLAIMS
When someone else's careless or intentional conduct cause damage to or destroys your property, you may file a claim seeking the replacement or repair cost of the damaged property.

DIMINISHED VALUE (DV)
The difference in value between a car that is in good working condition pre-accident minus the value of the car after an accident.

FAIR MARKET VALUE (FMV)
Fair Market Value is the price of your car or other property would sell for under normal market conditions.

TORT LAW
Any civil wrong or wrongful act, whether intentional or accidental, for which an action for damages may be brought. 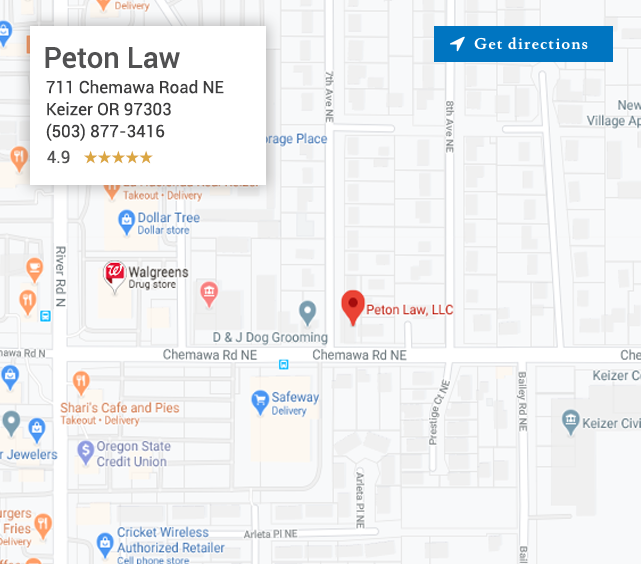 GET THE LEGAL HELP YOU NEED.
GET IN TOUCH.

If you’re in need of representation in a personal injury or bankruptcy case, Peton Law can help. Our legal professionals are experts in personal injury and bankruptcy law. We advocate for the best possible outcome for our clients—and we get results. Contact us today to find out how we can help you.

Thanks for your message! We’ll be in touch soon.